Many older decks have railing posts installed on the outside of the deck framing, and sometimes those posts were notch-cut at the bottom where they fit against the outside joists. Current codes demand stronger posts, so they are generally not notched and are installed on the inside of the framing. That means they need to be installed prior to adding the decking.
Wood railing posts are usually 4x4s, which can be left bare or covered with PVC or composite sleeves. Most local codes call for a railing that is either 36 or 42 inches tall, but check with your building department. The post will be the desired height of the railing, and the width of the framing it is attached to, minus the thickness of the cap that rests on top of the posts (if any).
This article shows how to install posts with two bolts in order to create a very strong attachment. However, your building department may require additional hardware for extra strength. Also, if you are attaching a railing post to an outside joist that is not doubled, install blocking nearby or to the side of the post. Otherwise, the post will be wobbly.
[tip] Cutting Posts to Length
Cut the post to the desired height of the railing, the width of the framing you will attach it to, and the thickness of the decking, minus the thickness of the top cap (if there will be one). Here we show posts for a 36-inch-tall railing, which is common. To 36, we add 9 1/4 inches for the width of the 2x10 framing, plus 1 inch for the thickness of the 5/4 decking, and subtract 1 inch for the top cap - for a total railing post length of 45 1/4 inches. (Because the post cap and the decking are the same thickness, the portion of the railing above the framing is an even 36 inches.)
[tip] Which Way Should They Face?
On a deck with angles, most of the posts should have their inward faces parallel to the house, rather than at a 45-degree angle. The exception: If your stairs will come out at an angle, the railing posts should face in that direction so the stair railings can be easily attached.
[tip] A Post Next to the House
Where the railing runs into the house, some decks use a 2x4 attached to the house’s siding rather than a 4x4 post. However, this creates a place for moisture to collect, so most builders install a 4x4 post a few inches away from the house, as shown here.
[tip] Using Bolts with Fascia
If you want to cover the face of the framing with fascia, install the fascia first. Then, drill holes and drive the railing post bolts. Once all the railing posts are installed, you are ready to lay the decking. After the decking is finished, it will be time to install the top and bottom rails, balusters, top cap and any other parts. 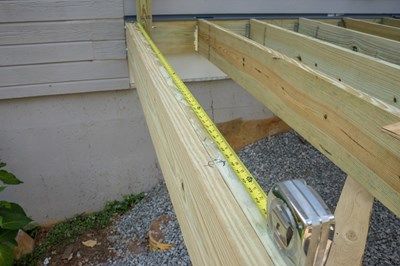 1. Determine where you want your rail posts. You will need one at each corner. Position the others as evenly spaced as possible.

Mark for the exact position.

2. Codes typically require that posts be no more than 6 feet apart. Mark for post centers, then draw lines to indicate the sides of the post. 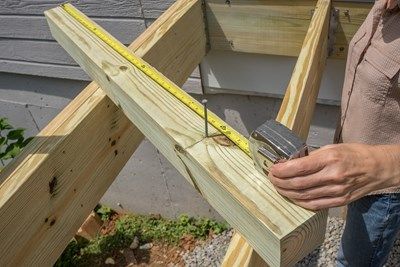 3. Cut the post to length. Draw a line marking where the post should meet the top of the framing, and tack a nail there as a height guide.

4. Hold the post in position, resting on the tacked nail from step 3. Use clamps to hold it temporarily in place, making sure the clamps will not get in the way of the bolts you will install. Check that the post is plumb in both directions. If the post is out of plumb in the direction shown in the photo, use shims to make it plumb.

Drill holes for the bolts.

5. Drill two holes through the outside framing and the post. The holes should be in the center of the post, 1 1/2 to 2 inches from the top and bottom of the framing. You will need a long drill bit the exact size of the bolts’ shaft (usually, 1/2 inch). Aim to hold the drill bit straight and level as you work. When the going gets tough, pull the bit out to release wood chips, then go at it again. If the bit starts to smoke from being too hot, stop work and allow the bit to cool off. Otherwise, you will dull the bit in short order.

Pound the bolts through.

6. Pound the bolts through the holes with a hammer. Use at least 5" long bolts for 4x4 rail posts. 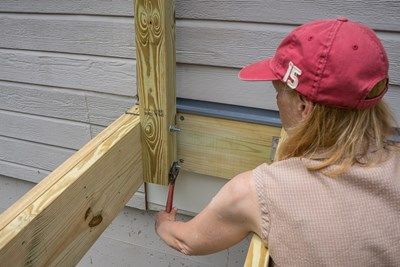 Slip on washers and tighten the nuts.

7. At the other side, slip on a washer and nut. Use a wrench to tighten the bolts.

Next Article:
Parts of a Wood or Composite Deck Railing