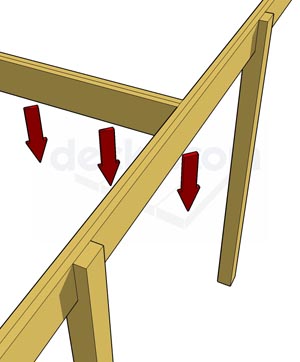 Unsupported beam-to-beam connections apply large concentrated downward loads to a relatively small surface area along the beam. This type of load puts a lot of shear stress on the beam, which under certain conditions could lead to the beam snapping and a catastrophic failure. Point loads distribute weight differently than when using joists that distribute the load evenly across the length of a beam. Unsupported beam-to-beam connections are only acceptable when used in circumstances where the beam will only be carrying a very small load such as attaching a small stair landing.

It is always preferable to position a structural support post underneath any beam-to-beam intersection.

Never attach an unsupported beam-to-beam connection to the center third of a beam or to any section of a long beam. You may need to redesign the frame to avoid generating point loads. In most cases it is best to consult a professional engineer to evaluate the specific situation.

Next Article:
How to Use a Triple Deck Beam to 6x6 Post Connection