Wood can be impregnated with a variety of preservative chemicals to prevent rot and insect infestation in exterior applications like decks. Several species of wood can be treated, but a regionally available species usually predominates in any particular locale.  Pressure-treated lumber is ideal for outdoor construction as it has a long, useful life span and is much less expensive than alternatives. Treated wood can last more than 40 years. The treatment process involves placing a load of lumber in a huge cylindrical chamber called a retort with a door on one end that can be sealed airtight, and then forcing waterborne chemicals into the wood under pressure. 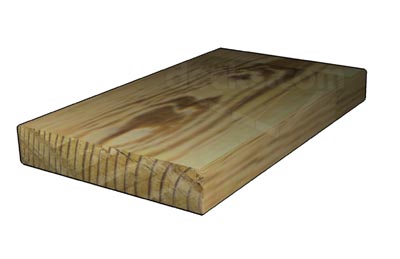 The strength and properties of lumber from different species of wood varies considerably. Species like southern pine and douglas fir are often used for deck framing. There are a handful of species commonly used for structural framing, and while relatively similar, their properties affect how far they can span as joists. Span tables will list species separately for this reason.

Grade is a description of the quality of a given species. As lumber moves through a mill, grading inspectors review each piece and separate them onto different paths. Knots, decay, grain angle, wane, damage, warp and other physical characteristics of an individual piece of lumber distinguish it into a specific grade. The grades provide a tighter presumption of the structural performance of each piece. A beat-up, decayed 2x8 covered in knots won’t be as strong as a clean, straight-grained one. Common grades, from worst to best, are utility and structural select. Span tables will also list grades in separate columns to further fine-tune the maximum allowable span.