Tools Needed For Building A Deck

If you’re considering a DIY deck project, you’re probably wondering what tools you’ll need. The good news is, if you’re a handy guy or gal, chances are you already own many of the tools needed for deck construction. Most hand tools are inexpensive and worth buying, even if you will use them only for your deck. Power tools can be pricey, so you may choose to rent rather than purchase some of them. Deck tools can be divided into five categories: tools for lay out and measuring; for general carpentry and digging; for cutting; for fastening; and for smoothing and shaping. To use these tools effectively, see the section on Basic Skills. There you will also find some tips on choosing the best tools. 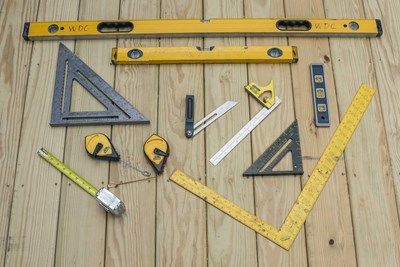 Tools for Layout and Measuring

Tools for Layout and Measuring

To build a quality deck, you will check constantly to be sure its parts are level, plumb and square. The following deck tools and equipment will help you with precision and more while you build.

A 25-foot tape measure handles most tasks, but a longer tape can come in handy for a very large deck. Chalk lines, also called chalk boxes, quickly create perfectly straight lines. And to save you a headache later, opt for blue chalk, which easily washes off (red chalk, on the other hand, is fairly permanent).

Framing and speed squares are essential tools needed to build a deck. A framing square, also called a carpenter’s square, is essential for checking corners for square and marking long square lines. Speed squares (shown in two sizes) will be heavily used when marking boards for cutting. To check for level and plumb, you’ll find yourself using a torpedo level for small pieces, and a 2-foot level and a 4-foot level for larger pieces. 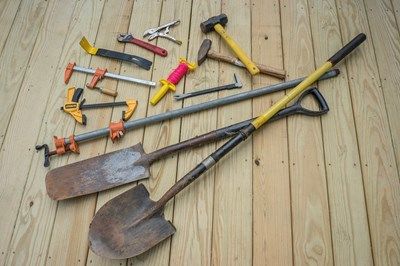 For excavating, hand tools can usually do the job, though, you may want to hire a landscaper or rent an earth-moving or post hole-digging machine for very large jobs.

There’s no avoiding digging when it comes to building your deck, which makes the following tools required. A spade shovel digs earth and removes soil. Use mason’s line to mark off areas to be excavated. A drain spade has a narrow blade that helps when digging shallow postholes. For deeper post holes, use a clamshell post hole digger.

Clamps of various types hold pieces in alignment temporarily while you drive fasteners. A pipe clamp is as long as the pipe you attach the two parts to. A squeeze clamp grabs quickly, but a sliding clamp holds more firmly.

A flat pry bar slips into narrow spaces and pulls boards into position with minimal damage to the wood. A pry bar/nail puller does those jobs as advertised, but will likely mar the wood. For tightening bolts and nuts, use a crescent wrench, also called an adjustable wrench, while a pair of locking pliers may be needed to hold the other end of the fastener. Hand sledges are sometimes needed to persuade tight boards into position. 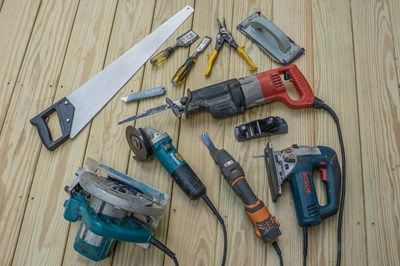 Building a deck does not call for cuts as precise as those for cabinetry, but your cuts should be very accurate.

A circular saw is often used for most cuts, making it the best saw for deck building. Get one that cuts reliably, and equip it with a sharp carbide-tipped blade.

Use a jigsaw, also called a saber saw, for curved cuts and cutting in tight spots, and an oscillating saw for even tighter spots.

A reciprocating saw is essential for demolition and is also handy for finishing cuts on 6x6 posts, though, you could use a hand saw instead.

Keep a utility knife and some wood chisels in your tool belt to finish and slightly modify cuts. Tin snips, also called aviator shears, cut metal and plastic flashings. A small plane that is correctly adjusted shaves boards with ease. You may occasionally need a grinder to cut away metal or masonry. 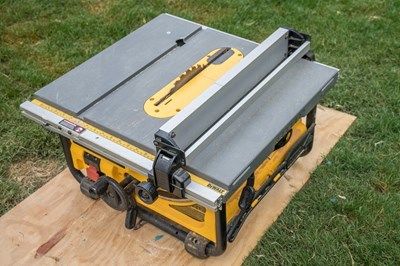 A small table saw like this, called a worksite saw, quickly and conveniently rips boards to their required width. 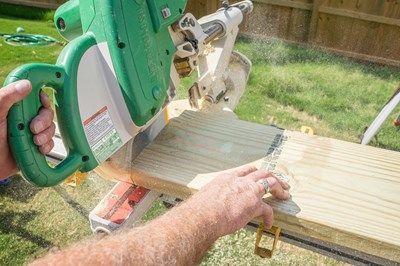 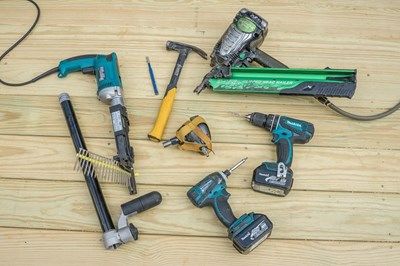 A power nailer works much faster and easier than a hammer, and prevents denting often produced by mishits when hand nailing. Still, a hammer is often used for driving joist-hanger nails and for getting into tight areas. A nail set extends your reach when nailing. A teco nailer, which attaches to an air compressor like a power nailer, can also be used for driving small nails for joist hangers and other hardware.

An 18- or 20-volt cordless drill has become one of the most popular fastening tools. An impact driver makes it easier to drive screws and bolts very firmly, and if you plan to install decking with face screws, consider using a speed driver. This tool features a clip you can load with screws in order to drive a lot of them quickly, and has an extender that enables you to do the job while standing up. 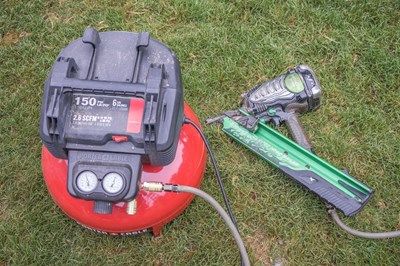 Though professionals often have larger compressors, a model like this, with 150 PSI and 6 gallons, is plenty of power for building a deck. 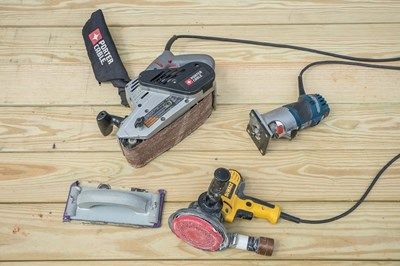 Tools for Shaping and Smoothing

Tools for Shaping and Smoothing

Use a router with a roundover bit or a decorative bit to ease sharp edges and creative custom looks. A belt sander is the most powerful sanding tool, but should be used carefully so you don’t dig into the wood. A random orbit sander is also effective at smoothing and removing stains, but is safer to use. A hand sander is also a viable option to get the job done, too.
Previous Article:
How to Build an Above Ground Pool Deck
Next Article:
Anatomy of a Deck