The term “sistering” joists is the practice of overlapping two joists by a certain distance across a beam to create an extended joist. This is unusual in new deck construction and would only be necessary for very long spans that exceed the length of your longest boards.

Sistering joists is commonly used when adding onto an existing deck or repairing a deck. In these cases, the overlapped joists help tie the framing together by combining the rigid members over a beam. The longer the overlap distance, the stronger the connection. You should overhang at least a couple of feet on each side of the beam. The side-by-side joists should be attached together by a nailing pattern similar to combining boards to form a beam. If you are adding onto a deck, you must make sure the footings are large enough to support the added loads. 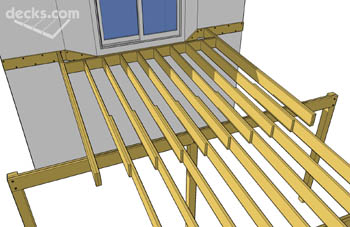 Balconies are defined as small decks built without support posts usually constructed with projected joists that are run back into the house. This type of deck uses sistered joist to project a cantilevered effect. A structural engineer should be consulted anytime an unsupported balcony is being constructed to ensure the structural integrity of the design.

Previous Article:
Framing a Deck Parallel to a House

Next Article:
How to Angle Corners and Joists