How to Install Deck Girder, Cantilever or Drop Beams

A girder, cantilevered or drop beam is a structural member positioned below the joists to support the weight of the frame.  Cantilevered beams are stronger than flush style beams because they rely on the strength properties of the wood rather than the individual mechanical and fastener connections. 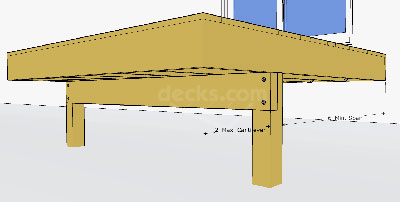 Notching posts lends itself well to cantilevered beam construction, as does the practice of chamfering the corners of the deck.  In order to install a cantilevered beam you must have enough clearance below the joists to install the beam.  Allow for a minimum of 6” airspace between the ground and the bottom of the beam.

Always remember to install the beam crown side up so the weight of the deck will level itself.  If you install a beam crown side down the deck is more likely to sag.  On the negative side cantilevered beams can create a ledge underneath the joists that can become a home to birds and insects nests as well as block views and limit headroom.

The American Wood Council’s Wood Frame Construction Manual states that beams can generally cantilever up to 1/4 their span over a post. This design criterion is generally limited to beams supporting equivalent joist lengths in its span as in it’s cantilevered sections. For example, a double 2x12 beam spanning 12 feet can cantilever up to 3 feet over a post. While this maximum is allowed in conventional code-compliant design, it may not provide the comfort and stability on the deck surface desired by the occupant.

Next Article:
How to Install Deck Header & Flush Beams