Constructing a balcony-style deck is generally only feasible during the original construction of a home. The floor joists inside the home are extended outside, beyond the walls of the house, to support the deck floor. The strength of the joists in the balcony are dependent on a considerable “backspan” of the same joists into the structure, generally a minimum of three times the length of the joists exposed at the balcony. These joists must also extend to a second bearing location inside the home, often a beam or bearing wall down the middle of the home.

Renovating an existing home for this style of deck is not practical. Ceiling finishes below the joists would need to be removed, as would any electrical, plumbing or mechanical systems within the floor framing. When compared to installing a few posts and foundations, there is little return for the cost and labor associated with a retro-fitted balcony deck. If considering this type of deck during the home construction, bear in mind the difficulty in the future to repair or rebuild it. At a minimum, pressure-preservative-treated lumber should be installed, as well as a very close attention to the flashing and moisture control of the framing connections outside. The longer the materials will last, the longer the balcony design will last. Balcony decks are typically replaced using conventional methods of posts and foundations. Cantilevered decks or balcony decks without support posts is a controversial subject in the deck building world. 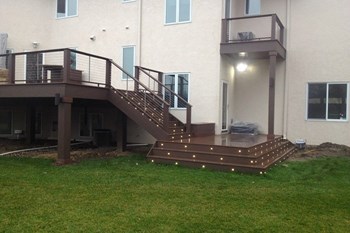 This small 4' x 6' balcony provides a nice walkout area for the master bedroom.

Previous Article:
Joist Tape: What Is It and Do I Need It?
Next Article:
How To Build a Hexagon Deck